Relay GB-23 is one of the Locations in The Outer Worlds. Relay GB-23 serves as The Groundbreaker's primary comms. relay station. Players will be able to travel here after speaking to Edna Ingmire at the Groundbreaker's Engineering after accepting the quest, The Silent Voices. Locations are defined by their individual and varied biomes spread around the Halcyon System. Planets and other celestial figures house the inhabitable regions in The Outer Worlds. Relay GB-23 has the following services: 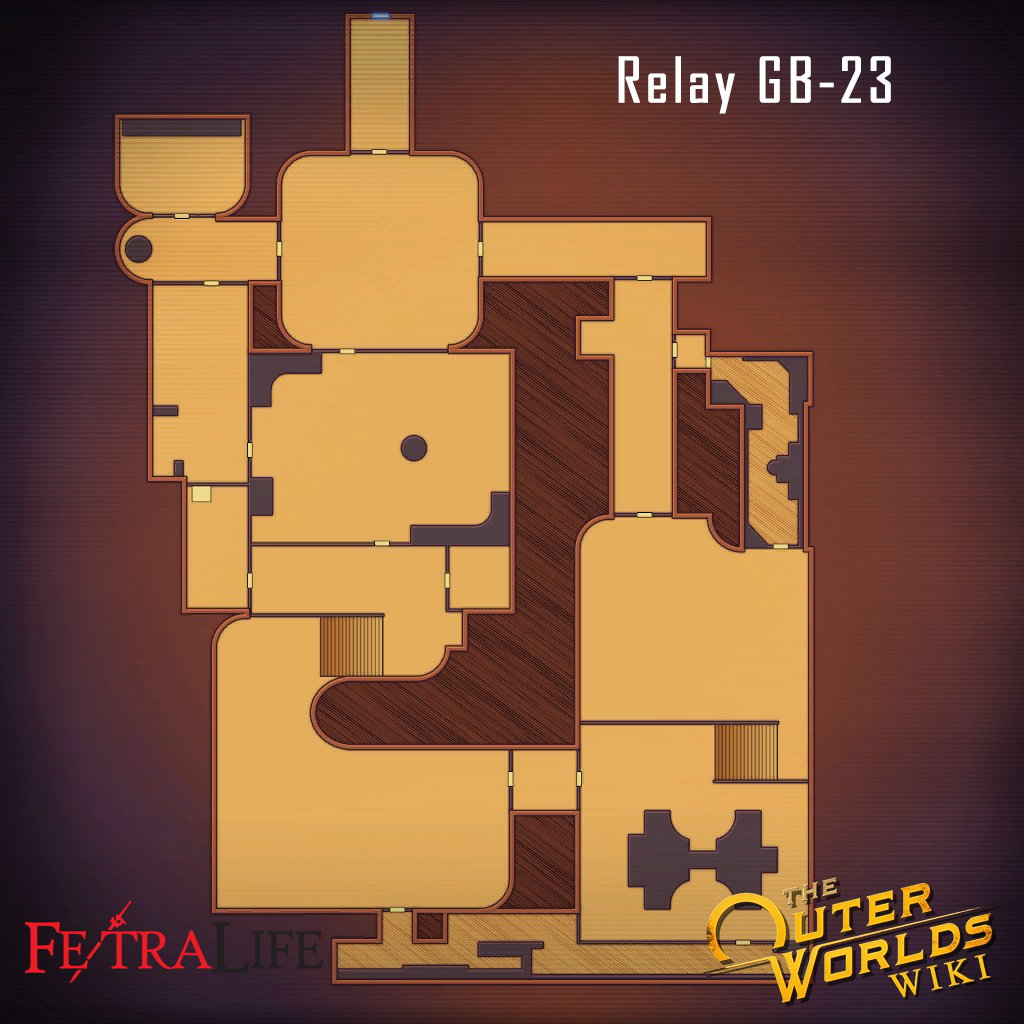 Frey's Journal - A Beautiful Dream
Last night I dreamed, and it was beautiful. The streets of Byzantium were decorated with crimson streamers that laughed in the breeze. They asked me to take them, to give them to my special ones. I gathered the crimson in my arms and felt so alive, so happy. I turned and Delilah was beside me. I did not question why my supervisor was there, her eyes so full of the emotions I KNOW she feels but dares not show at work.

I wrapped her neck in crimson, tying it tight as a scarf on a cold day. So beautiful. Then the crimson on her neck opened as a second mouth and began screaming, screaming...

When I awoke, I was scared. The dreams are so real now. And this time I recognized a face. I had to leave work early today. Every time I looked at Delilah, I heard a whisper in my mind about how beautiful she would look with a touch of crimson on her neck. Her neck.

Frey's Journal - Escape
I've had to start a new journal. I cannot read my previous entries without the whispers temping me.

The whispers DO NOT STOP. Every person I see, the whispers tell me to help, help, help them. They show me the pain and longing hiding in their eyes. They tell me how these people want - no, NEED - the gifts I can give. All it would take is a few moments with a blade. A bright, bright, bright fountain of crimson to delight the eyes and all of their pain would be gone. I could do it. I know how to help them. It gets harder and harder to stop myself.

I saw a friend today. An old friend from school who's now a doctor for Auntie Cleo. I told him about my dreams. Nothing outright! Oh no, I'm not so foolish as that. I told him it was an old book I'd found and described my dreams and whispers as happening to a character in the book. I asked him how he'd help this character. He looked at me and he knew. He knew. He knew! The whispers told me to end his pain, that he'd tell. He'd tell.

I got up and left quickly. I did not hurt him. Not. Not. I have to leave Byzantium. He will tell, tell, tell. They'll come for me and lock me away. I must find a secret place. A place I can be alone. A place with no whispers.

Frey's Journal - The Source
THE WHISPERS HAVE A SOURCE AND I HAVE FOUND IT, FOUND IT!!!!!

I have taken refuge on an orbital relay station. It's smaller than a worker's hovel - barely a few thousand square meters! - but sufficient for my needs. I was able to flee Byzantiumwith enough bits to purchase supplies to last for decades. It was strange being among common people on the Groundbreaker. The whispers barely stirred at the sight of their ill-fed, scarred, and unwashed bodies. If only there were fewer freighters docking there, bringing real people from Byzantium, I could almost have made a home free of temptation. Free. Free.

As I made this place livable - or as much as it can be - I started hearing the whispers from the relay terminal. They told me to listen to the voices traveling through the aether to reach me. Calling out to me to help them, alone, lonely, NEEDING my help. I found a way to power down the transmitter. No more voices in the aether, and NO MORE WHISPERS! They fell silent, silent, silent!

This was not me! It's not! Not! I am not this foul thing that I have feared for so long. It was the voices in the aether trying to make me hurt others. But I was stronger than they, and I have defeated them. Them. Them!

I have already begun making plans to return to my home. Now that the whispers are defeated, I can resume my life again. I can't wait to return. I miss my family and co-workers so much. Especially Delilah...

Frey's Journal - Forgive Me
I was so wrong, wrong, wrong! The whispers did not stop. Not! Not! They have returned. They howl, howl, howl at me, demanding I return home and bathe the streets in crimson. Bright crimson. Beautiful crimson.

I can only think of one way to end this. End. End. Forgive me, Delilah...